Written by Adam Lucas on August 15, 2016. Posted in Basketball

It never fails. No matter what time Carolina plays a home basketball game, whether it’s 12 noon or 9:30 p.m., when the players leave the Smith Center after the game, there are autograph seekers waiting outside. It’s a much better way to try and get signatures than leaning over the tunnel inside the building, and most often, the patience is rewarded with a few autographs or selfies.

Whether you’re the parent of a kid who begs to stand outside and wait for the Tar Heels, or the kid herself who does the begging, I’ve got some reassuring news for you: don’t worry. You can still turn out to be a fairly productive member of society (well, sort of). I’ve got proof. 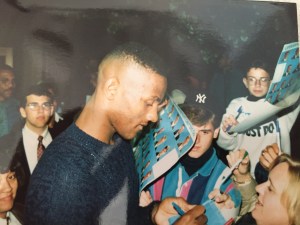 The above picture was taken at the Blue-White game before the 1990-91 season. Kids, the Blue-White game was something that used to happen twice every preseason, and it was basically an open scrimmage. The 1990 edition was an especially big one, because Dean Smith had inked an incredible freshman class that included Eric Montross, Brian Reese, Derrick Phelps and Pat (“Pat had a good game”) Sullivan, plus a very talented player who would ultimately transfer, Clifford Rozier. The Montross/Reese/Phelps/Sullivan/Rozier group was essentially the Fab Five before the Fab Five existed…and, of course, this group minus Rozier ultimately beat the actual Fab Five in the 1993 NCAA title game.

Before they could do that, though, they had to play the Blue-White game. In the photo above, that’s George Lynch signing autographs after the game at the Smith Center exit. That kid holding the Sharpie and the team poster and making the truly regrettable fashion choice to wear a turtleneck under his Carolina “Just Do It” sweatshirt is me. This pretty much ensures my kids will never believe I was once cool.

Here’s Eric Montross as a freshman with his proud father beaming in the background: 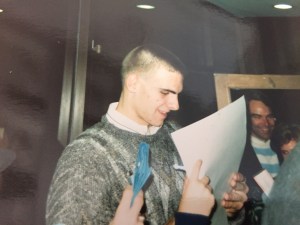 That’s current Tar Heel assistant coach Hubert Davis in the back of this shot: 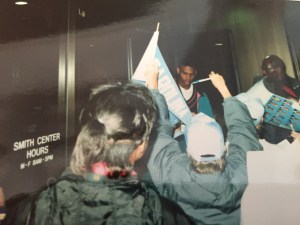 And here’s me wisely standing on a ledge to try and reach Sullivan. 1990 was a simpler time; we all just mobbed the exit and made the players wade through us. Today the autograph seekers are at least nice enough to stand back from the door. 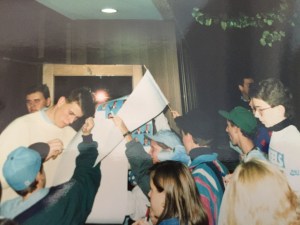 I’ve still got that poster, along with dozens more programs, posters and basketballs that I tracked down while following the Tar Heels around the country during the late 1980s and 1990s. At the Final Four in New Orleans in 1993, while everyone else was out enjoying Bourbon Street, I was staking out the elevator at the team hotel, adding signatures to a team-signed basketball that I now cherish. After numerous autograph hunts at the ACC Tournament and the now-defunct Diet Pepsi Tournament of Champions, I quickly learned who enjoyed signing and who considered it a chore. Former assistant coach Dave Hanners was by far one of the nicest people I ever encountered in these pursuits, as he was prone to revealing when the team might be leaving for a shoot around or a meal. That was precisely the useful information I needed to make sure I was loitering in the lobby at exactly the right time. Despite being the target of virtually everyone chasing the team, I never saw Dean Smith turn down a request, and almost every time, he would ask, “Who should I make this to?”

I never sold or traded a Carolina autograph. Why would I? As far as I was concerned, every single player on the roster was the pinnacle of the entire sports world. My favorite player on the 1990-91 team was a guard named Kenny Harris who eventually transferred. I still have a hat signed by Harris. I never wore it–after all, it was priceless and couldn’t risk being worn out in public.

Here are some things you definitely need in order to be a Carolina basketball autograph seeker:

The 1990 version of me would’ve been stunned to find out that more than 25 years later, I follow around the Tar Heels as a “job” rather than a hobby. The 1990 version of me also would’ve wanted to make sure to find out when the team was leaving for the next shoot around, so I try to be as helpful as I can when fans are looking for the team. If there’s one thing I learned standing outside the Smith Center and waiting in lobbies, it’s that everyone can use their own Dave Hanners. You never know when you might fuel a fan’s passion that turns into a lifetime of love.