Written by Adam Lucas on August 24, 2016. Posted in Baseball

The gum will never die

In 1991, however, we did not have any of those options. But we still knew exactly how we were going to become rich beyond our wildest dreams: baseball cards.

I was absolutely certain that baseball cards were going to make me filthy rich. I started out buying wax packs at Rose’s, occasionally dipping into the world of rack packs, where you could attempt to select the pack with the biggest star showing on the front of the pack (always Ryne Sandberg for me). Then I learned about Paper Heroes in Knightdale, a baseball card shop owned by a gentleman named Paul Snow. For at least my next five birthdays, my entire birthday list looked like this:

Armed with that year’s birthday haul, I’d spent entire afternoons at Paper Heroes. Sometimes I’d buy full boxes (36 packs in each box). Sometimes I’d buy single older cards in the fancy screw-down holders. By 1991, I had become a savvy baseball card connoisseur. I attended baseball cards show at the NC State Fairgrounds. At one point, I subscribed to Baseball Cards magazine, Sports Collector’s Digest, Tuff Stuff, and of course, I eagerly awaited every month’s issue of Beckett Baseball Card Monthly (they once had an awesome Bo Jackson cover that briefly became a collectible in itself). The latter had a price guide that was essentially written in stone. Every month, I’d wait to see if any of my prize cards–you know, like the ’89 Upper Deck Griffey or the ’83 Topps Sandberg–had possibly received an “up arrow” by the price, or perhaps even the dreaded “down arrow.” As I tallied my imaginary net worth every month, my dad would unfailingly tell me, “You realize the cards aren’t worth anything if you don’t sell them.” I ignored him. Why would I sell my baseball cards? They would be worth millions one day.

In 1991, Topps celebrated its 40th anniversary of printing baseball cards with a special promotion. They randomly inserted one of every Topps card into wax packs. To a savvy baseball card shark like myself, this seemed like obvious gold. I purchased an entire case of 1991 Topps cards, meaning I purchased 20 boxes of 36 packs each. And why not? There might be a 1952 Topps Mickey Mantle in there! In 1991, that card was approaching $10,000; by the time I was really ancient, like 40 years old, it would probably be worth as much as the Mona Lisa. Dad was convinced he’d had dozens of Mickey Mantle cards when he was my age, but he unwisely put them in the spokes of his bicycle because “it would make my bike sound like a motorcycle.” Ha! I would never be that foolish! I first sorted my cards into numerical order, then put them in plastic sheets (one to each slot, so the cards wouldn’t decompose each other–can’t be too careful with chemistry), then put the sheets in binders that were labeled by which set they contained.

Yes, looking back I agree it could have been an early sign of an obsessive compulsive disorder.

While cleaning out a closet recently, I found about a dozen of those 1991 Topps boxes, still unopened. There was only one thing to do, of course–tear into them. 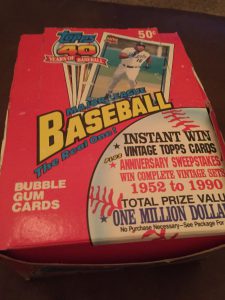 I know what you’re most curious about: yes, the gum survived. Yes, that perfect pink sliver of rock-hard alleged gum was still just as pink as you remember. The disappointing news is that it no longer carries that Topps gum smell that will forever be synonymous with baseball cards. A normal person might have realized the lack of a smell might indicate it would be unwise to consume the gum. This did not occur to me. After sitting down with our oldest son, I had to try the gum that came out of the first pack we opened. 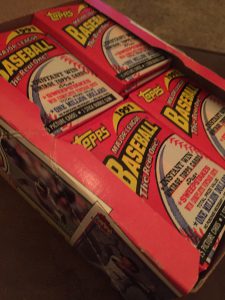 It fell apart in my mouth immediately. Now, you might remember that Topps gum was not exactly high-quality carcinogens to begin with. But after 25 years in the wrapper, it had devolved into little tiny pieces of crispy cardboard. It tasted pretty much like what I would imagine chewing an actual baseball card would taste like, except without the complete yearly stats and cool trivia facts. Our oldest daughter happened to be passing through the den when I sampled the gum. I faithfully reported it was not delicious. She gave me an incredulous look, like when I don’t know the words to a Hamilton song. “Why would you eat 25-year-old gum out of a pack of baseball cards?” she said.

As the molecules broke down into tiny little pieces of brittle pink rocks in my mouth, I realized she had a point, although I didn’t admit this to her (Parenting 101). I did quietly make a mental note that in the event of a nuclear strike, I could probably construct an impenetrable shelter from pieces of 1991 Topps gum.

We opened an entire box of 1991 Topps cards while watching the Little League World Series. The coolest card, by far, was the horizontal shot of Roger Clemens posing by the words “Strike out” on Fenway Park’s Green Monster, but that was an aberration; in 1991, most of the cards featured players sitting on the bench in the dugout. Many of the names I remembered (don’t tell me you’ve forgotten Oddibe McDowell), some I didn’t. At one point, Drew piped up with, “Hey, I got Steve Avery!”

I prepared my speech on the early 1990s Atlanta Braves and the Avery/Maddux/Glavine/Smoltz quartet. Just as I began my soliloquy, he continued, “You know…the guy from Making A Murderer!” 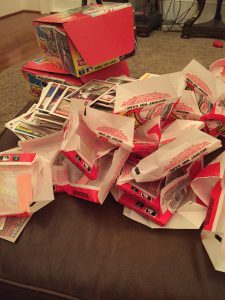 I pulled a Ryne Sandberg All-Star card and a Mark Grace…the 1991 version of Adam would have immediately put those cards into top-load holders to keep them in mint condition. Instead, Drew and I gathered what we believed were our best finds and put them on the kitchen table. This is them: 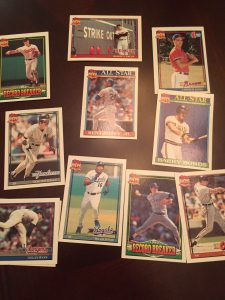 These, folks, are the cards I expected to one day enable me to retire. As best I can tell on eBay, their present worth is currently about a dollar.

Of course, as Dad would say, they’re not worth anything unless I’m selling them. But why would I ever consider selling them? They’re worth too much to me.

But I can let you have a great deal on some slightly chewed gum.