Written by Adam Lucas on November 3, 2016. Posted in Baseball

Of all the World Series moments I’ve been lucky enough to witness over the past week, in a week that contained maybe the best World Series and best single World Series game ever, the most unforgettable didn’t even happen on the field.

My son, Asher, and I attended Games 3, 4 and 5 at Wrigley Field this past weekend. We arrived to Game 3 early, of course, so we could do our traditional walk around the stadium and then settle into our seats early in order to maximize our obsessive nervousness. 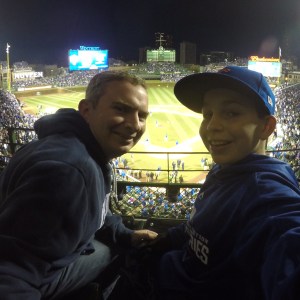 About 30 minutes after we sat down, our seatmates arrived next to us. As soon as he sat down, the man next to me, who was about 50 years old, began rummaging through his bag. He moved aside a commemorative program, took out a World Series t-shirt and shook it out. Whatever he was looking for, he couldn’t find it.

He stood up and checked his pockets. Nothing. Then looked back through the bag, and finally exhaled. “Here we go,” he said.

He’d brought a photo of his dad in a Cubs hat. He pulled out a roll of tape and affixed the photo to the rail in front of us, where he left it for the entire game. “Died a few years ago,” he told me. “Wanted him to be able to see the Cubs in the World Series.”

I’m often asked about why I’m a Cubs fan. I don’t have a good answer. They were always on WGN when I came home from school, and I fell in love with Harry Caray (“You know, Steve, Gallaraga spelled backwards is…Agarallag”) and Ryne Sandberg. Most other kids liked the Braves, and a few liked the Orioles, and some liked the Yankees. I stuck with the Cubs. My parents took me to Wrigley Field in the mid-1980s, it soon became an annual trip, and the bond was sealed.

We took my grandparents on at least one of those visits, and I’ve got a photo of myself sitting in Section 218, row 8, with my grandfather—which is the exact same seats where Asher and I watched an NLCS victory over the Dodgers this year. The most recent piece of jewelry I gave my wife is a pendant that contains the logo from a game-used baseball that was used in the game played on her birthday at Wrigley Field this year. The fact that I married someone who considers this a cool gift is enough to make me believe in the idea of soul mates. 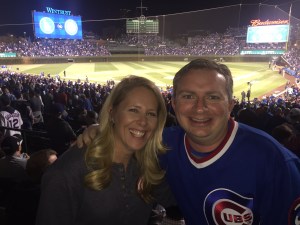 Through the years of Jody Davis and Doug Dascenzo and Moises Alou, sometimes my dad and I would ask each other, “Can you imagine what it would be like if the Cubs were in the World Series?”

Of course we could not imagine this because it was unimaginable. We often told people that the Cubs were the universe’s way of keeping us humble. Any time we felt too arrogant watching the perennial greatness of Carolina basketball, we’d remember that the Cubs season was just a few weeks away.

But we kept going back. There is something about a game at Wrigley, about the neighborhood and the way the city supports the team that makes a city of three million feel like a small-town high school football cheerleading squad. Walking down Michigan Avenue last weekend during the World Series, I almost expected to see Garrett Popcorn and Do-Rite Donuts and the Drake Hotel closed tight with a “Gone to the game” sign on the front door.

One of the most striking parts of attending the World Series at Wrigley was the sheer happiness of everyone within six blocks of the field. Police stopped to take pictures. Fans offered to buy strangers a drink, so amazed were we that we were here, at Wrigley Field, watching the World Series. Can you take a picture of us with the scoreboard in the background? Of course I can. Can you get one of us, too?

Then it was Game Seven. Getting to Cleveland and finding tickets was going to be a challenge, and I somberly told Asher the odds of the Cubs actually winning the game were very slim. You know…down 3-1, road game, history, all that.

But we went. Conservatively, the Progressive Field crowd was at least 40 percent Cubs fans. Our section was almost entirely blue. We sat one row behind two brothers from Chicago who’d driven six hours to be there, and next to a mom and her son who had driven eight. Some games you attend with friends. This one was for family.

After nine innings and a rain delay and four hours, my teeth hurt. Around the top of the tenth, I suddenly felt my molars aching. It didn’t make a lot of sense, until I realized I’d been gritting my teeth for at least the last hour. The Cubs don’t win these games. Maybe you have a light understanding of that fact because, well, they’re the Cubs.

Cubs fans have lived it. You know that sense you get about Carolina basketball, that they could come back at any time and any close game is a probable win? Cubs fans feel the exact opposite.

I attended the Bartman game with my dad in 2003. We woke up the next morning and the local Chicago news was broadcasting live from outside his house. I’ve watched 100-loss seasons. I’ve seen playoff teams with potential be swept by nondescript opponents.

This group was different. Somehow, and I’m still not sure how—but I intend to find out with repeated viewings for the rest of my living years—they did it. KB and Rizz and Dex and Grandpa and Zorilla and Schwarber and…well, when we’d jumped and screamed and high-fived and stood watching the celebration, the Cubs fan next to us said, “The Cubs just won the World Series, and we were here to see it,” and I got a little misty because that one sentence said it all. You can dream of Carolina winning a national title because it has happened. But dreaming of the Cubs winning the World Series felt more like believing in Peter Pan, where Peter is a light-hitting infielder signed to an exorbitant contract who makes too many errors and is untradeable.

I hugged that guy. On Wednesday night, I hugged lots of people I don’t know. I am not a hugger. But what I learned is that when the Cubs win the World Series, I hug like Jim Valvano.

After Wednesday’s game, after multiple renditions of “Go Cubs Go” and after multiple hugs with complete strangers and after the Cleveland police had to tell we tens of thousands of Cubs fans that we were required to leave Progressive Field even though I fully believe some of us were prepared to sleep there, we finally found a cab.

In the car, Asher and I talked about the game’s biggest moments, about Grandpa Rossy’s home run and Ben Zobrist’s (“BENNY!”) huge hit and Miguel Montero’s extra-innings single and the Indians fan behind us that bellowed throughout the entire game except for the last inning. I looked over around 1:30 a.m. and noticed that Asher’s eyes would intermittently get heavy between his recaps of the biggest plays.

With two outs in the Cleveland tenth, I had started videoing each pitch in the hopes of capturing the historic moment. But then the Indians began getting hits, and you know what that means—my videos were causing the Cubs pitching to struggle. So I stopped taking video, which means I don’t really know what happened when Kris Bryant fielded the final out and threw to Anthony Rizzo to set off an incredible celebration.

We talked about what we remembered of the final out, which we’ll begin watching hundreds of times in the days to come. “I think,” I told Asher, “that I might have picked you up in the air and spun you around.”

He grinned. “You did,” he agreed, and his head dropped onto my shoulder.

“It was awesome,” he said, and he went to sleep. 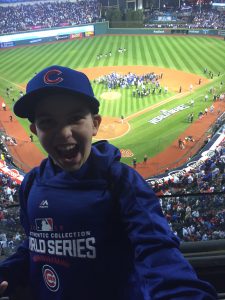